Ella is a senior in chemistry at Portland State University doing her honors thesis on mechanobiology of metastasis.

Ian was a summer intern who is now a senior at UC Berkeley majoring in computer science and minoring in physics. He is working on generating Matlab code to analyze cell migration patterns.

Scott graduated from Reed College in 2015 and spent a year as a graduate student in bioengineering  with the Galbraith Lab before returning to his original training in plant biology.

Eric graduated from Columbia University in 2013 with a degree in Physics, and is interested in quantitative analysis approaches in super resolution microscopy.  He is now a graduate student in biophysics at Berkeley.

Dan is an NGP (Neuroscience Graduate Program) student who did a rotation in the lab last year.  He is interested in mechanisms of axonal pathfinding and actin dynamics.

Laura did both a summer and a semester internship in the lab.  She ddd a great deal of single molecule imaging of adhesion complexes.  She recently graduated from Lewis and Clark college and is currently working in Greg Herman's lab at L&C studying C elegans.

Will graduated from Reed College in 2014 and worked in the GalbraithLab investigating the role of vinculin in cell-ECM interaction. He is currently a Research Engineering / Scientist Assistant in the Georgiou lab at UT Austin.

Nate is a DMICE student at OHSU who is doing a research rotation in the GalbraithLab.

OHSU Employee 001.  Smith was the Galbraith Lab's first employee after our move and is still remembered for her get it done and get it done right attitude.  She has moved on to a job as an engineer at Mollusk in New York.

Monique is a senior in bioengineering at Oregon State University.  She has been working in the GalbraithLab on generating characteristic metrics of cell migration and then implementing her approach with Matlab. 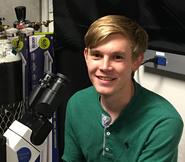 Nate is a senior  at Portland State University in biochemistry  investigating the role of the actin cytoskeleton in directional migration.